put a smile on your face - Fill Those Empty Seats

put a smile on your face

I arrived at the restaurant last night around 7pm.  It was busy. “Rush hour” in the restaurant world.  When I approached the hostess, she *smiled* at me like I was the only person of any importance on the entire earth (even though I had seen her do the same thing to the group of 7 who had entered in front of me) and warmly said, “Good evening. Welcome!  You would like a table for how many?” *smile*.  But it was a warm *smile*, not a cheesy, through gritted teeth smile.  I already liked the place.  The lighting was fluorescent, a huge negative in my book.  Ever seen Joe vs. the Volcano?  Yup. That pretty much sums up my relationship with fluorescent lighting.  But, this hostess’ *smile* negated the effects of the fluorescent lighting.  I forgave the establishment their lighting faux pas. 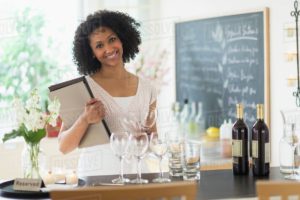 “One,” I replied, expecting to see that look of pity cross over her face., or worse yet the look of annoyance at having the give an entire table to just one person.  But, instead, she lit up the room again with that *smile*, saying, “Delightful! We have just the perfect table for you. Do you prefer against the wall or center-room?”  Since I travel A LOT and eat alone A LOT, I’m used to dining alone.  I actually like it. And I couldn’t believe that this hostess was actually asking what type of location I’d like in the dining room! There are three main seating areas in the restaurant:  Central, Couples, and By-the=Kitchen.  The most popular place to seat a single is at the ever-coveted By-the Kitchen table for two.  Next in seating is the Couples area – you know, the section that is more romantic and more populated with tabletops for two. Finally, there is the Central seating, smack dab in the middle of the restaurant at a two- or worse yet four-topper.  Either way, there I am, staring at an empty chair, as though I’ve been stood up.  Sometimes my mood is suited to the quieter, more private Couples area of the restaurant, but others, I’d prefer to be more Central, in the midst of the hustle and bustle. Never would I choose the By-the-Kitchen seat unless it was the last one available, but that is where I’m most-commonly seated when alone.  It’s as though they want to hide me away.

Last night, I was feeling pretty spunky, so I opted for the Central seating option.  I don’t recall ever being asked *where* I’d like to sit when dining at a restaurant solo.

*smile* There it was again. That smile, as thought there was nothing I could do or say that would upset her.  “Your name?”  she beamed.  “Dave.”  “Ok, Dave, we’ll have that table ready for you in just a few minutes. Just have a seat.  Would you like a glass of water while you wait?”   WHAT?!?!? She offered me water while I wait?!?  Simple, but soooooo thoughtful.  “No thanks,” I responded by rote as I walked toward the black chairs lined up against the wall. Three quarters of them were full.  But then I paused, spun on my heel, and said, “You know what?  I would like a glass of water.”  *smile* – There it was again – and before I knew it, I was holding a tall cool one. Of water.  Without realizing it, I scampered a little bit on my toes out of sheer joy at my experience there in the 10 x 13-foot foyer.  It.had.been.a.long.Monday. and the mere act of receiving a glass of water from a gal with a genuine *smile* was turning my day around.

I hunkered down in the chair and took out my phone for what was sure to be at least a 15-minute wait.  No sooner had I opened Facebook and drunk half of my water than she called my name.  I stood up and approached the waitress who was standing there, waiting patiently with one menu in her hand. “Dave?” Her name tag read “Annalise,” so I responded, “Annalise?” with a smirk.  The cold water had definitely helped my mood, but not as much as the brilliant *smile* of the hostess.  Annalise giggled and flashed one of those there-is-no-customer-more-important-than-you *smiles* before saying clearly, “Your table is ready, please follow me.”  Aside from fluorescent lights, one thing that I really detest about restaurant dining is when the seater does not speak to me, but instead just turns tail and walks into the restaurant.  Am I supposed to follow? Where are we going? Did I make him angry?  Aaaaagh!  But, thankfully, last night, Annalise not only spoke actual words to me to let me know that indeed it was time to go to my table, but she also *smiled* and glanced back at me as we walked to make sure I was keeping up and asked, “So how was your day?”   I was so stunned that the only thing I could stammer out was, “uh. Good.”  There it was again. That *smile*.

We stopped in the dining room, a little to the left and toward the back at a table that was set for one and when I say set for one, I mean set for one.  There was no awkward second (or third or fourth) chair. There was no second (or third or fourth) place setting. There was one beautifully arranged place setting and one stately chair.  The table was set in such a manner that my place setting took up the entire space, as though in reality this was a table made for one – and maybe it was?  It sure felt like it!  I sank into the padded chair, sighed relief and contentment, and looked up to see that *smile* again along with a fresh glass of water.

I could go on, but you get the idea.  The name of this restaurant should be “Put a Smile on your Face and a Bounce in your Step” because that is exactly what it did.  After I returned home for the night, with a full belly and feeling fantastic, I reflected on why that was.  Simply, it was that *smile* and the ability of the staff of the restaurant to respond to each customer as though they were valued.  Well-trained staff are such a sweet gift to us customers.  And in this case, that training included some skills to ensure that customers feel golden and are treated as though they are important to the success of the restaurant.  Kudos to my new favorite restaurant. Keep *smiling*.

Get On the Path to Success Today!